MOVA’s user-friendliness and versatility has grown over the years with new releases and new practices. Recent work has culminated in the release of MOVA M8 which includes some significant enhancements. A summary follows, and more detail is given after that. 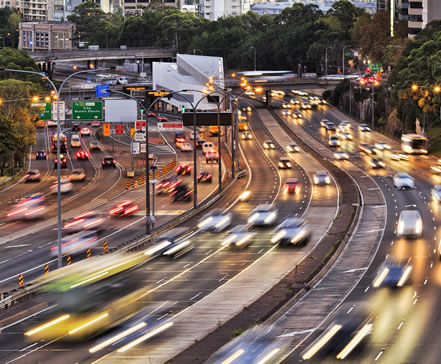 Up to and including MOVA M7 engineers have had to become familiar with the “MOVA messages” which are a series of numbers, prefaced with mnemonics, to understand what MOVA is doing. The messages do take some getting used to, and even so it can be a challenge to follow them even for the most experienced. To help with this, graphical representation of MOVA activity has been added which makes it easier to understand MOVA operation.

Bus priority facilities have existed in MOVA since version M4. In this latest version, the facilities have been extended so that buses can be included in MOVA’s optimisation routines. This is designed to allow buses a measure of priority, without upsetting normal junction operation too much. Further enhancements include the use of alternative maximums and link based priority codes.

Also available is a Web user interface (UI). Some manufacturers have implemented their own Web UIs, but now it is a standard component of MOVA. The feature allows engineers to use a Web browser to communicate with MOVA. The MOVA Web UI includes the ability to transfer MOVA data sets to and from the MOVA unit.

In addition, a number of ‘minor’ enhancements have been made. These include the addition of second sink detectors, a user-set link maximum and the ability to increase the value of saturation flow that MOVA uses to mark end-of-saturation once the queue up to the X-detector has cleared. This allows for unusual situations.

All of these new features are available through the use of the latest version of MOVA Tools which has been significantly changed in line with the new MOVA M8 features.

Figure 1 shows an example of the special conditioning logic form, known as a Rule. This particular one is making use of the smoothed flows as the ‘source’, one of many MOVA variables available in this tool. In this case the eastbound and westbound flows are compared and if the westbound flows are ‘greater than’ (operator GT) eastbound the result is true; and false otherwise. Alternatively, the ‘parameter source’ can be a detector channel, a user named variable (from another Rule) or a numeric value instead of a MOVA variable. There can be many Rules.

Figure 1 also shows the pre-output timers available. The names of each of the timer functions describe their functionality. The principle is that the result of the Rule can be subject to the timers to achieve the required result.

Finally, the output can be any detector channel, one of up to eight output channels or a user defined variable which can be used in other rules.

The advantages to using special conditioning within MOVA are mainly that: 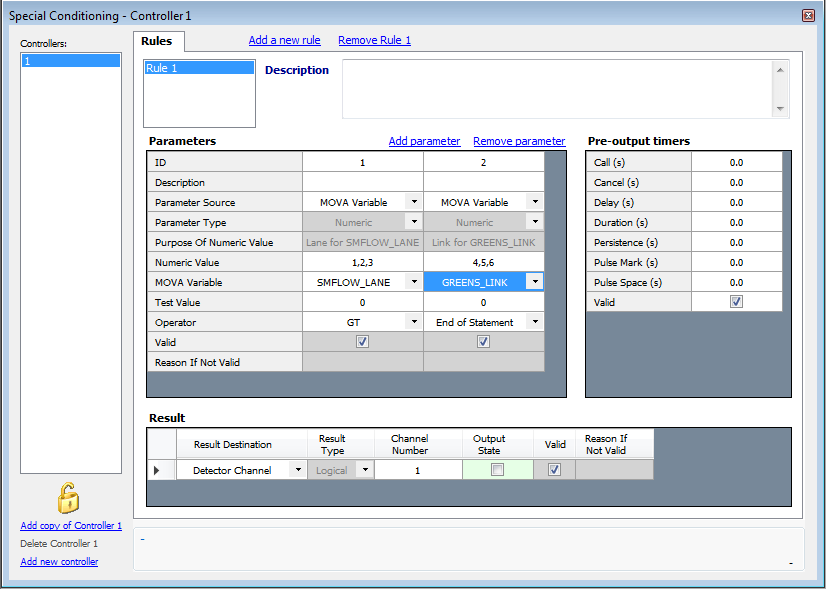 An important use to which the special condition can be put to is with PCMOVA, the version of MOVA that can be connected to microsimulation tools. Adding the feature to MOVA means that special conditioning that is used regularly at linked MOVA sites, but hitherto could not be replicated in PCMOVA, can now be included. It means that sites that have two or more linked MOVA junctions can be modelled correctly so that appraisals can be carried out with more confidence. It also allows experimentation with alternative methods of linking before going out on street.

MOVA Tools has a site diagram drawing facility which shows the MOVA data for a site on a schematic diagram. This has been part of MOVA Tools since its release in 2013, though its use isn’t compulsory. Now the diagram is used to form the basis of a mimic diagram that shows information about MOVA operation when connected to a MOVA unit. See Figure 3.

The mimic diagram is effectively the replacement for MOVA Comm (for MOVA M8 only). On the mimic diagram you can see detector activation, ‘end-sat’ decisions, whether a lane is oversaturated and many other items of information besides. During stop and delay optimisation you can see a representation of the shift-register model that MOVA uses to determine its calculations. These visualisations are designed to help the user understand MOVA operation and make MOVA validation easier and quicker than before.

At the bottom of the Figure, buttons give access to all the other facilities that effectively replace the MOVA menu that you would see through MOVA Comm for previous versions. This includes access to the well-known MOVA messages as well as raw (pre-conditioned) detector states, and the states of the new output channels available via special conditioning. 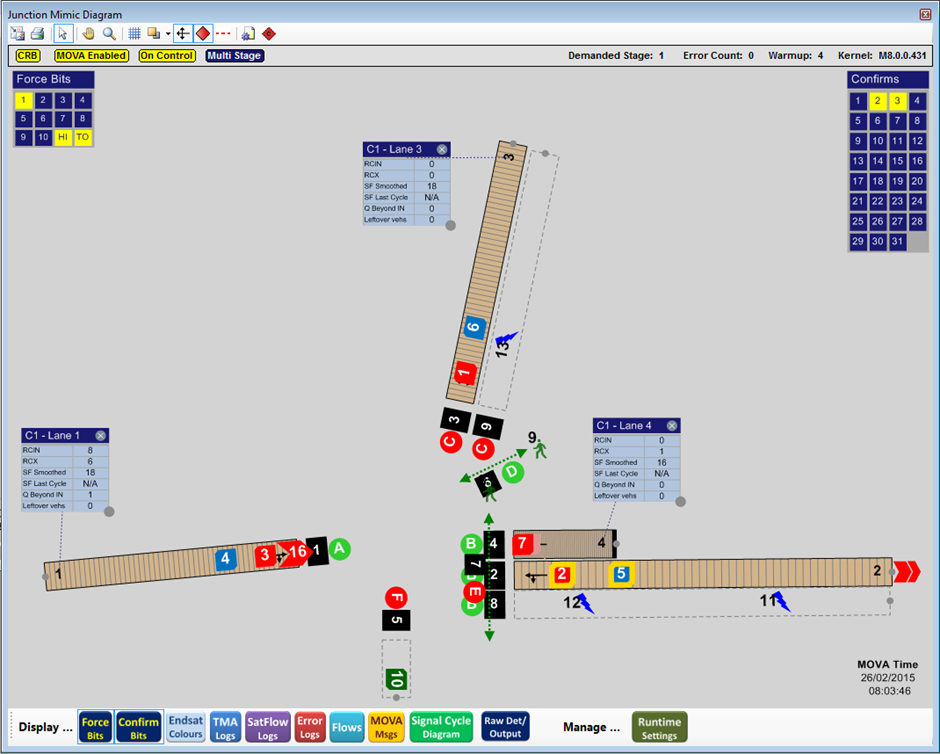 The facilities in MOVA versions M4 to M7 for providing buses priority provide a fair degree of user-set flexibility in the way it reacts. However, when MOVA does react, the optimisation normally carried out is ignored. The facilities are used extensively in linked MOVA systems and the way it reacts is useful for such situations.

However, when providing buses priority, doing so at significant expense to other traffic is not always desirable, especially in busy periods, and any problems caused can mean subsequent buses suffer. Improving the way MOVA works in this area will have a significant impact. The additional facilities are as follows:

Including buses in stop and delay optimisation

To address the issue and yet still give buses a measure of priority, the MOVA stop and delay optimisation has been extended such that buses can be included with user-selectable weighting. For buses approaching on green, the weighting helps extend the green for them, giving them a better chance of continuing without being stopped. For buses stopped at red, the disbenefit for continuing the current green increases, which will tend to give the bus an earlier green. Hence MOVA will tend to favour buses to an extent that the user has some control over, but without ruining the operation of the junction to the detriment of other road users (and subsequent buses). The facility might also be useful for HGVs where it could be desirable to avoid stopping them – all that is required is the addition of selective detection.

The stop and delay optimisation algorithm in MOVA is used only when the junction is deemed to be undersaturated. During oversaturation, MOVA switches to an alternative algorithm that maximises capacity. In such conditions it is more difficult to provide buses with priority without causing too much disruption. Nevertheless, in order to provide some preference to buses, in MOVA M8, revised stage maximum times can be introduced when a bus has been detected. The maximums can be set to come into effect during just oversaturated conditions, just undersaturated conditions or both. Before reaching the alternative bus maximum times, MOVA operates as normal. This means that is possible to set a junction up such that it takes advantage of the ability to include buses in the stop and delay optimisation in undersaturated conditions and then in oversaturated conditions stages can be cut short on the way to the stage servicing the bus. All of the values are, of course, configurable.

Prior to MOVA M8 the bus priority facility used ‘priority facility’ (PFACIL) codes for each stage to determine whether and how a bus would get priority. A number of settings are available for each stage, but these could only be set once for each stage. This could be limiting, particularly if the facility was actually being used for linking MOVA junctions together. In MOVA M8 the PFACIL codes, which are still codes for a stage, can be set differently for each link. This provides the flexibility to take alternative action depending on which link the priority demand was placed upon.

Two issues have arisen in recent years which the Web User Interface (Web UI) attempts to resolve. Firstly, connecting remotely to a MOVA unit using MOVA Comm has issues to do with security. Secondly, maintenance engineers in particular, and anyone who needs to connect to MOVA for a quick check of something, currently needs to use a laptop with all the attendant additional effort that requires.

The security issue can be addressed by the Web UI with added security layers implemented by the manufacturer. Maintenance engineers can connect to the MOVA unit via a tablet or even a mobile phone to inspect MOVA operation on site. In addition, when on site, the engineer can transfer MOVA data to and from the MOVA Unit via the Web UI so that they can often complete their task without using a laptop or even having to open the controller door. Example screen shots are shown in Figure 4. 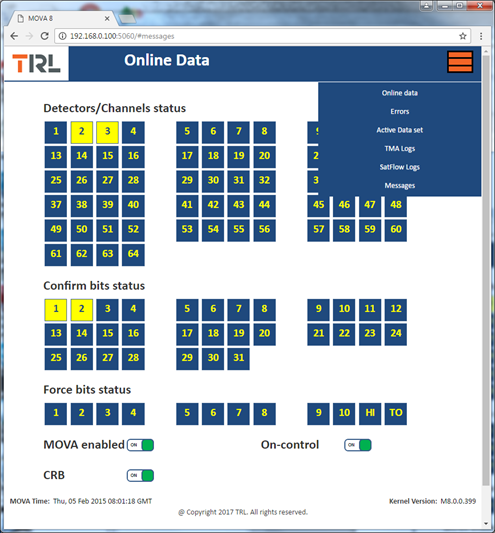 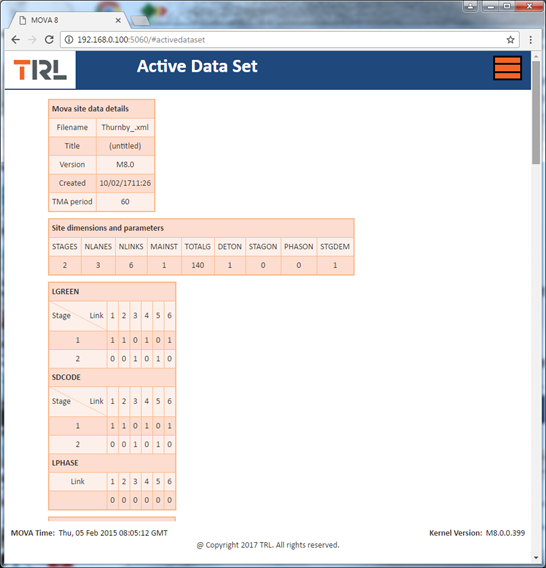 A number of other seemingly minor changes have been made, largely in response to needs from clients and installers, and it is hoped many issues have been dealt with and the increase in flexibility will make a significant difference to the way MOVA can be used. The additions are:

MOVA M8 is the latest incarnation of the well-established MOVA signal control strategy. The additional facilities make much better use of the underlying MOVA algorithm providing greater flexibility through more options to use in dealing with different situations. Improved usability has been a focus too and MOVA M8 is more user friendly than before.

The main additions are:

MOVA Tools has been developed such that all the new facilities are available through it including the communications (replacing MOVA Comm for MOVA M8). This makes MOVA M8 an even more complete package suitable for the future of signal control requirements.